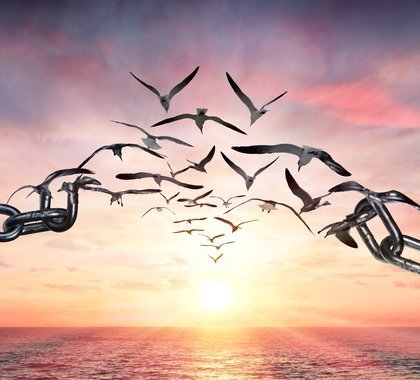 However, in my work as a trauma resolution coach I rarely witness that version of freedom occurring– instead I see a reaction to circumstances – which is believed to be choice and freedom. I call this version of freedom faux freedom.

The capacity to have freedom arises from the level of nervous system health that’s present – what I mean by that is when someone is either in a state of hypo (freeze) of hyper (fight and flight) they don’t have freedom – they are being dictated to by their physiology – a physiology that feels under threat.

In this state we don’t have the freedom to choose, instead any sense of freedom we think we’re experiencing, is actually faux freedom.

The problem is many people are not aware when they are in hyper or hypo nervous system patterns – because they are so normal for them – they feel them as part of the tapestry of life – rather than the dysregulation that they really are.

Let me share an example of a client of mine – called Amy. For all of her adult life she’s moved house on average once every 6 months to a year – looking for the perfect place to live surrounded by the perfect community. She moves on impulse because an ‘opportunity’ has come up, or she can’t work though challenges with her house mates, yet every time she believes that it’s a choice – that its freedom. She drops any security she may have gathered and moves into a shared house situation that she already knows isn’t going to work for her. Of course the situation fails and within a few months she’s off again – endlessly searching for home while shrouded in the illusionary nature of faux freedom.

In this scenario Amy is in chronic flight – her nervous system has incomplete emergency response energy that wants to get away – to run to safety. Whilst this energy remains unprocessed she periodically acts out the flight by moving to a new home. This is her version of getting away – escaping from threat.

Until recently she wasn’t aware of the mechanics of her nervous system – and instead labelled herself as a flaky commitment phobe – as did her friends and family. As she’s become aware of the deeply ingrained flight response that’s longing for completion in her body – she’s been able to work towards completing and digesting it – allowing for more regulation and the freedom to choose from a regulated place – true freedom.

Trauma resolution creates choice – it bestows upon us the true gift of real freedom. It stops us from repeating the same patterns in our lives – freeing us from familiar pain and suffering and providing us with balance and stability, allowing for us to show up in our lives with consistency – in our relationship to self, others and to life.

Signs that you may be experiencing faux freedom

You’re an eternal nomad – endlessly searching for your people

You get triggered into a nervous system response of fight, flight, freeze when relating to the word ‘commitment’

You may be described as a butterfly, flighty, commitment phobe, or flaky by other people

Resolving the trauma behind faux freedom requires, time, patience and commitment – but you can titrate this journey – meaning you can discover commitment and through that real freedom just one drop at a time – this isn’t an all or nothing situation. Instead it’s about developing honesty and a willingness to meet the parts in you that want to run, hide or fight and to give them the care – the trauma resolution – they are longing for.